U.S. to Limit Service Animals on Planes to Dogs Only 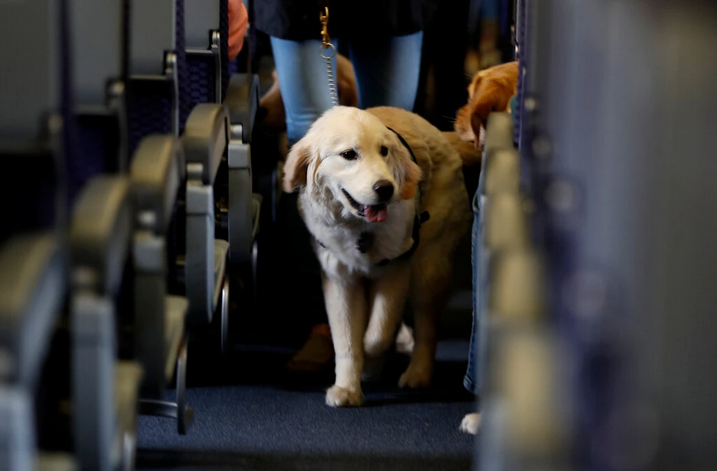 The federal government gave its final approval on Wednesday to a set of rules that clamp down on the types of service animals allowed on U.S. flights, reserving the designation for dogs and freeing airlines from having to accommodate a variety of emotional support animals.

The changes, which drew more than 15,000 public comments since the Department of Transportation proposed them at the beginning of the year, will take effect next month.

They have kindled an intense debate among the airlines, advocates for people with disabilities who rely on service animals and passenger rights groups, and came as a growing number of travelers have taken a variety of animals on flights in recent years.

Most recently, transportation regulators had said that dogs, cats and miniature horses should be prioritized as service animals by airlines. But passengers have tried to travel with monkeys, birds and rabbits, raising eyebrows of other passengers and testing airline policies.

Federal transportation officials said Wednesday that disruptions caused by taking unusual species aboard airlines had “eroded the public trust in legitimate service animals” and that there were increasing cases of travelers “fraudulently representing their pets as service animals.”

The new rules require airlines to treat psychiatric service animals the same as other service animals. The owners of those service animals must provide documentation developed by the Transportation Department attesting to the animal’s health, behavior and training.

Passengers traveling with service animals will no longer be required to physically check in at the airport instead of online.

The new rules stopped short of banning emotional support animals outright, but proponents said that airlines would no longer have to accommodate nonservice animals in the cabin.

Some airlines, including Delta and Southwest, said they were reviewing their policies on taking animals on flights. And some airlines allow passengers to take small pets in the cabin for a fee.

The lobbying group Airlines for America, which includes all of the major U.S. carriers, welcomed the changes.

“The Department of Transportation’s final rule will protect the traveling public and airline crew members from untrained animals in the cabin, as well as improve air travel accessibility for passengers with disabilities that travel with trained service dogs,” the group’s president, Nicholas E. Calio, said in a statement on Wednesday.

Some advocates for people with disabilities said the new rules were too rigid and did not take into account travelers with special needs.

“There’s a large number of people with intellectual and emotional disabilities that benefit from having that kind of support on a trip,” Curt Decker, the executive director of the National Disability Rights Network, said in an interview on Wednesday night.

Mr. Decker said that travelers with disabilities were being penalized because of other people abusing the system and that airlines had brought the problem on themselves by charging costly fees for transporting pets in cargo holds.

“There’s no one in the disability community that thinks a turkey is a service animal,” Mr. Decker said.

Douglas Kidd, the executive director of the National Association of Airline Passengers, a nonprofit organization, said in an interview on Wednesday night that the new rules failed to address providing adequate space for service animals on planes. He said that a series of high-profile episodes of animals dying while being shipped on planes had given rise to passengers attempting to take their pets onboard.

“Animals are living things, and they’re not just baggage,” he said. “If the airlines took better care of animals in their charge, then people would be more likely to ship them.”

The Association of Flight Attendants, the trade union that represents nearly 50,000 flight attendants at 20 airlines, said in a statement that guidance from the federal government had been sorely needed.

“Passengers claiming pets as emotional support animals have threatened the safety and health of passengers and crews in recent years,” the union’s president, Sara Nelson, said in a statement. “Flight attendants have been hurt and safety has been compromised by untrained animals loose in the cabin.”

Mona Ramouni, 40, a Michigan resident who is blind and has relied heavily on her miniature horse Cali when flying, bemoaned the rules change. She said her horse, which is 29 inches tall, weighs about 170 pounds and fits into the area in front of the bulkhead seats on planes, was better trained than most service dogs and had a longer life span.

How to Find the Perfect Cat for Your Family

How to Find the Perfect Cat for Your Family